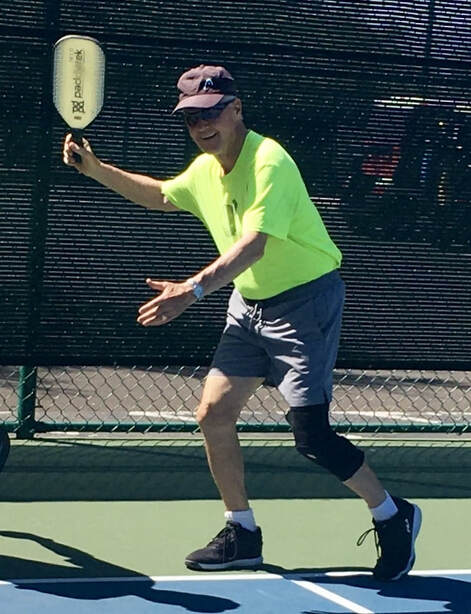 Pickleball came to the Highlands in 2012 by way of resident Bob Hassett, who played the sport in his home town of Ukiah, California.

Bob asked the HOA to put up a temporary pickleball net so residents could try out the sport. The net was set up in the big parking lot across from our current courts.  The new pickleball area was affectionately called the “Christmas tree lot” because of the temporary nature of the court setup.”Pickleball Bob” taught new players and sourced affordable paddles for them to get started.

Highlands Pickleball found many friends and devotees. The sport was recognized then, as now, as “the fastest growing sport in the country for active seniors.”  The HOA built 2 courts in 2013, and later budgeted funds for a possible future 2 courts.

With the first two courts, and with many new players, much of the play was early morning drop-in.  There were frequently 16 paddles waiting to play, and in 2016 the call “We need more courts!”  became a frequent refrain.

Thursday evenings were a popular time for the new club players to gather, play and socialize before dark.  Many remember Ray Kuhn’s famous prickly pear margaritas!

Courts 3 and 4 were built in 2017, allowing for a complete schedule of drop-in play, group play and training times.  No more long waits with 16 paddles waiting to play on just 2 courts!
​

Bill and Marissa Buell brought the start of a training program to Highlands Pickleball in 2017.  They were new players who became students of the game. They took professional and on line instruction, played in local tournaments, and began offering skills clinics to all who were interested.

Through training and group play, they established “3D play” at the courts, which refers to the universal strategy, court position, and shot selection in the all important first 3 shots of a pickleball point. Today the training program, hosted by club members, accommodates beginners through experienced players.

In the coming years, there is much more Highlands Pickleball history to be written…..